Manchester United will be looking to close-in on the top four with a win over Leicester City at Old Trafford on Saturday evening. Here is the line-up we expect Ralf Rangnick to select.

Goalkeeper: David De Gea is almost certain to keep his place once again so Dean Henderson will have to settle for a place on the bench this weekend.

Defence: Man Utd have received a boost with Raphael Varane expected to be fit. The centre-back picked up a knock while away on international duty but has made a swift recovery and should keep his place.

Harry Maguire has been suffering from a poor run of form but Rangnick appears to be standing by him so the England ace should start alongside Varane. That means Victor Lindelof will have to settle for a place on the bench.

Diogo Dalot appears to have secured the right-back spot ahead of Aaron Wan-Bissaka so he could keep his place in Man Utd’s back four. Alex Telles is available after returning quickly from South America so he should keep his place ahead of Luke Shaw.

Midfield: Fred is also available for selection following his exploits with Brazil on Wednesday. Scott McTominay is likely to partner Fred in midfield with Nemanja Matic having to settle for a place on the bench.

Bruno Fernandes was in excellent form having scored twice to help Portugal book their place at the World Cup finals. He’ll start in the attacking midfield role for Manchester United against Leicester.

Attack: Edinson Cavani is set to miss out after suffering a calf injury while playing for Uruguay in midweek. The striker wasn’t involved in training on Thursday so is unlikely to be involved this weekend.

Cristiano Ronaldo will lead the line up front once again for Man Utd and the superstar will be looking to find the target having netted a hat-trick on his last Premier League outing.

Jadon Sancho has been one of United’s best performers recently so he should keep his place in attack. Paul Pogba is available after recovering from a knock so he could be recalled to start against Leicester.

Anthony Elanga would be the man to make way with the teenager joining Marcus Rashford, Jesse Lingard and Juan Mata on the bench.

Here is how Manchester United could line-up: 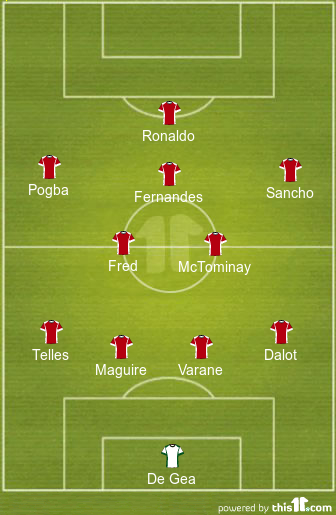