Arsenal will be eyeing a third-straight Premier League win when they host Wolverhampton Wanderers at the Emirates Stadium on Thursday.

The Gunners recently secured a solid 2-1 triumph over Brentford, but had a nervy finish with the Bees scoring in the dying seconds of stoppage time.

They will now entertain Wolves at home. Arsenal are facing Wolves for the second time this month, having won 1-0 at Molineux earlier this month.

Mikel Arteta’s side showed tremendous defensive resolve in that game. They held on for a victory despite going down to 10 men in just the 69th minute.

Here is how Arsenal could line up against Wolves:

Goalkeeper: Aaron Ramsdale was not at his best with his distribution against Brentford, and could have stayed on his line for the late goal conceded. Irrespective of this, he is expected to start between the sticks. He has kept 11 clean sheets in the league and has been ever-present since September.

Defence: Arteta is expected to make one change to his back four. Ben White and Gabriel Magalhaes are certainties in central defence and the same could be said for Kieran Tierney at left-back.

Cedric Soares has had his fair share of criticism from Arsenal fans, but put in a good defensive shift against Brentford. However, he could still make way for the return of regular right-back Takehiro Tomiyasu (valued at £22.5m by Transfermarkt), who was only on the bench last weekend after overcoming a calf problem.

Midfield: Granit Xhaka and Thomas Partey are definite starters in the centre of the park when fit and available. Partey’s form has improved since the beginning of the year, and the duo appear to be getting the best out of each other. The only concern for Arsenal could be the lack of discipline. The Gunners can ill-afford anymore needless dismissals.

Attack: Gabriel Martinelli is available for selection after his one-game suspension for his controversial red card at Wolves. He has been one of the bright sparks over the past few months, but may need to settle for a bench role after Emile Smith Rowe’s superb display versus Brentford which was capped with the opening goal.

Bukayo Saka and Martin Odegaard should also be assured starters in Arsenal’s attack behind Alexandre Lacazette. The Frenchman registered an assist against Brentford, but his performance was still below-par. He squandered a couple of key passes and should have scored at least once. The French hitman has netted just three league goals this term. The Gunners need much more from their leading striker to boost their top-four hunt. 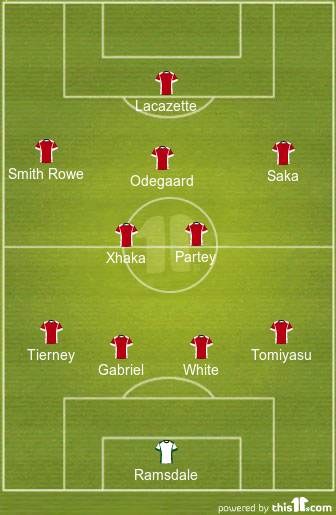