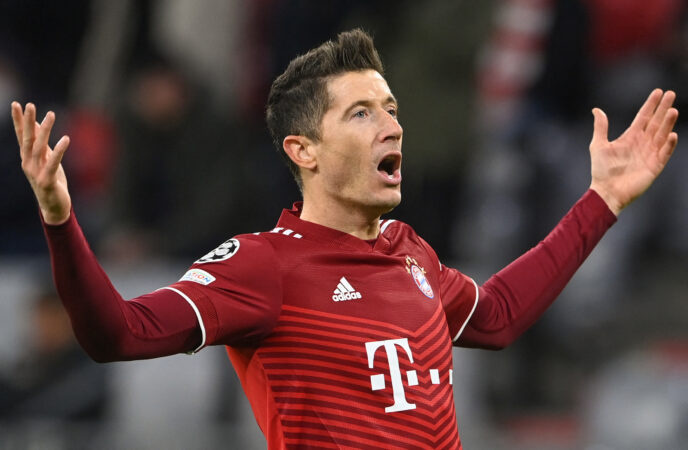 Manchester United would be open to making the first offer for Robert Lewandowski, should he decide to leave Bayern Munich this summer, Bild reports.

The Poland international has been in sensational form for the Bavarian giants this campaign. He bagged a hat-trick against Red Bull Salzburg yesterday to take his tally to 42 goals across all competitions.

Despite this, there has been speculation over his future at Bayern. It is now reported that the 33-year-old is surprised that there has been no contact from the hierarchy over a renewal beyond next season.

The striker is not looking for a way out at the moment, but Bild claims that United have registered an interest. The club have made it known that they would like to make the ‘first offer’ if he is willing to move on.

United caught the eye with their big money spending last summer. They recruited Jadon Sancho and Raphael Varane before sanctioning the surprise comeback of Cristiano Ronaldo after a 12-year gap.

Ronaldo was tipped to boost the club’s title credentials, but that has hardly been the case. He has netted 15 goals, but just nine of those have come in the Premier League from 23 appearances.

At 37, he is no longer in the prime of his career. Interim boss Ralf Rangnick has acknowledged the need for a younger striker, and Lewandowski would be a superb signing for the Mancunian giants.

Unlike Ronaldo, Lewandowski has not shown signs of slowing down. In fact, the £45m-rated star has only got better with age, and is now widely regarded as the best-performing striker in world football.

While the talk of Lewandowski arriving at Old Trafford is fascinating, it could be a distant dream as Bayern are unlikely to part ways with someone, who has been instrumental in their success.

The ongoing speculation with the Red Devils could be just agent-driven. United are still a big club in stature, and they are probably being used to persuade Bayern to extend the striker’s stay.

It was a similar story with Kingsley Coman, who was regularly linked with United until Bayern decided to meet his contract demands. The Frenchman penned a new deal until 2027 in January.