Arsenal will look to get back to winning ways when they take on Brighton at the Emirates on Saturday afternoon. Here is the side Mikel Arteta is expected to pick:

Goalkeeper: Aaron Ramsdale will have been disappointed to have conceded three goals against Crystal Palace on Monday night but he’ll no doubt retain his place between the sticks tomorrow.

Defence: Arsenal have been dealt a major blow with the news that Kieran Tierney has been ruled out for the rest of the season with a knee injury. Nuno Tavares had a shocker against Palace and was hauled off at half-time so it will be interesting to see what Arteta decides to do at left-back this weekend.

Granit Xhaka would usually be an option but he’s needed in midfield while Cedric Soares also can’t switch to the left as Takehiro Tomiyasu remains on the sidelines with an on-going calf issue. Therefore, Tavares may get another chance to redeem himself at home to Brighton.

Ben White should keep his place in the middle of Arsenal’s back four while Gabriel is also likely to be retained despite his disappointing performance on Monday night.

Midfield: The Gunners have been hit by a second huge blow with Thomas Partey ruled out for several weeks with a thigh injury that forced him off during the second half against Crystal Palace.

Albert Sambi Lokonga replaced Partey at Selhurst Park and should be recalled to start alongside Xhaka in midfield. Martin Odegaard should also keep his place in the middle of the park despite his below-par display last time out.

Attack: Gabriel Martinelli is pushing for a recall after being named on the bench on Monday night. Emile Smith Rowe is the man likely to make way for the Brazilian youngster after missing a golden chance to get Arsenal back in the game at 2-0 against Palace.

Bukayo Saka should keep his place on the right flank while Alexandre Lacazette will continue to lead the line up front. Nicolas Pepe missed the Palace game due to illness but could return to the bench tomorrow.

Here is how Arsenal could line-up: 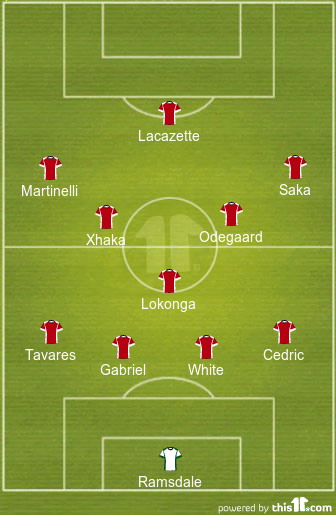