Liverpool will be looking to book their place in the semi-finals of the FA Cup when they take on Nottingham Forest at the City Ground on Sunday evening. Here is the team we expect Jurgen Klopp to select:

Goalkeeper: Klopp has confirmed that number one goalkeeper Alisson Becker will start between the sticks so Caoimhin Kelleher will remain on the bench.

Defence: Liverpool have been dealt a major blow with the news that Trent Alexander-Arnold is facing ‘weeks’ on the sidelines after suffering a hamstring injury. James Milner remains a doubt after missing the Arsenal game due to illness so Joe Gomez could get a recall to start at right-back on Sunday.

Kostas Tsimikas also sat out the trip to the Emirates Stadium with illness and remains a doubt so Andrew Robertson should keep his place at left-back for Liverpool.

Joel Matip continued his excellent form with another commanding display in midweek, however, Klopp may freshen things up with Ibrahima Konate coming in alongside Virgil van Dijk.

Midfield: Liverpool are also likely to make changes in midfield with a raft of options available to Klopp. Fabinho should retain his place in the holding role but Thiago Alcantara and Jordan Henderson could get rested.

Naby Keita is pushing for a recall and may get the nod on Sunday while Curtis Jones could also come back into the side. Alex Oxlade-Chamberlain and Harvey Elliott are also options but may have to settle for places among the substitutes.

Attack: Mohamed Salah was only named on the bench for Liverpool’s win at Arsenal after suffering an ankle injury last weekend. Klopp says he’ll have to assess the Egyptian international to see how he feels following his second half appearance but Salah could get the nod to return in attack.

Luis Diaz may keep his place in Klopp’s front three but Roberto Firmino is pushing for a recall after scoring off the bench against the Gunners. Sadio Mane and Diogo Jota could be the men to drop out on Sunday to join Takumi Minamino on the bench. 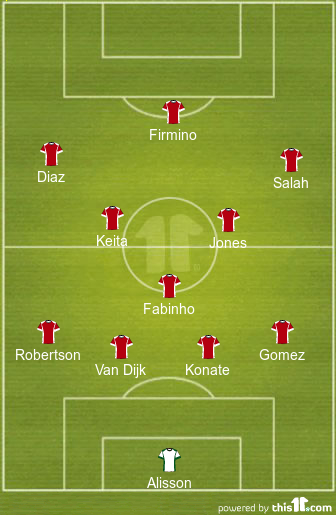