Liverpool take on Chelsea in the FA Cup final at Wembley on Saturday afternoon. Here is the team we expect Jurgen Klopp to select:

Goalkeeper: Alisson Becker is Liverpool’s undisputed number one goalkeeper so the Brazilian international will once again start between the sticks against Chelsea.

Defence: Klopp’s is expected to make a couple of changes in defence after rotating for the 2-1 victory over Aston Villa on Tuesday night. Andrew Robertson was rested for the trip to Villa Park so he should be recalled at left-back with Kostas Tsimikas making way.

Ibrahima Konate has seen most of his starts this season come in the cup competitions so he’s tipped to come back into the starting eleven at the expense of Joel Matip tomorrow.

Virgil van Dijk will once again marshal Liverpool’s back four as he’s been a mainstay in the side all season, with Trent Alexander-Arnold also  continuing at right-back.

Midfield: Liverpool have been dealt a big blow with the news that Fabinho is set to miss the showdown against Chelsea at Wembley. The Brazilian picked up a thigh injury against Aston Villa so won’t feature in the FA Cup final – but he is expected to be fit to face Real Madrid in the Champions League final later this month.

Jordan Henderson is likely to be recalled to start in the holding role for Liverpool while Naby Keita could keep his place in the middle of the park. Thiago Alcantara is set for a recall after being rested in midweek so Curtis Jones will drop to the bench where he’ll be joined by James Milner.

Attack: Sadio Mane is expected to keep his place up front after scoring the winning goal against Villa. Luis Diaz continued his fine form with another top display in midweek so he could keep his place, too.

Mohamed Salah is a nailed-on starter for Liverpool after being rested against Aston Villa so Diogo Jota may have to settle for a place on the bench alongside Roberto Firmino. 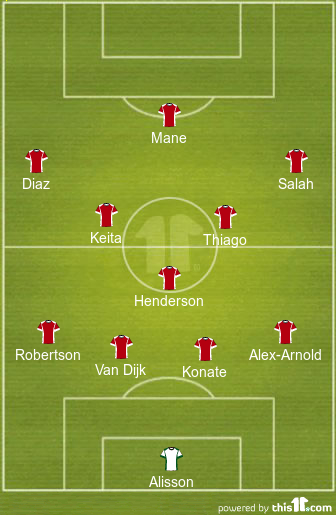