The Red Devils have had their last two games against Brentford and Brighton & Hove Albion postponed amid a coronavirus outbreak within the squad.

Ahead of the Magpies, interim boss Ralf Rangnick has confirmed that he has a fully fit squad at his disposal barring Paul Pogba, who is nursing a thigh injury.

The club were on an impressive three-match winning league run before the disruption. Rangnick will be hoping that his players can continue from where they left off.

Here is how Man Utd could line up against Newcastle:

Goalkeeper: David de Gea has been in stellar form in goal for Manchester United this term. He has made several stand-out saves that have single-handedly earned points for the club. The Spain international should be an assured starter between the sticks ahead of Dean Henderson.

The same could be said for Alex Telles at left-back. He has taken his opportunity to impress Rangnick in the recent injury absence of Luke Shaw. The Brazilian has been solid defensively and has also impressed with his overlapping runs, but there is room for improvement with his crossing.

In central defence, there could be a solitary change for Man Utd with Victor Lindelof making way for Raphael Varane. The Frenchman has been actively involved in training after missing several weeks with a hamstring injury. If he is deemed match fit, he should be an undisputed starter in central defence alongside Harry Maguire.

Midfield: Rangnick has preferred a 4-2-2-2 system in recent games, and he is unlikely to change his tactical set-up. Scott McTominay and Fred have been ever-present in the league under him, and the latter has been hugely impressive with his forward runs. The Brazilian has bagged one goal and two assists in his last three appearances. The pair are expected to continue in the centre of the park.

Attack: Bruno Fernandes and Jadon Sancho have been the regular picks for Rangnick in attacking midfield, and no changes are expected. Fernandes has been far from his best, but he recently bagged his first goal in 16 games. Sancho has shown glimpses of his quality after a tough start to his Man Utd career. He has just one league goal against Chelsea last month, but has been more influential in the final third.

Cristiano Ronaldo is an undisputed starter up front after a fantastic return to the club. Alongside De Gea, the Portuguese was pivotal to the club’s progress from their Champions League group. He has 13 goals from 19 appearances this term. Mason Greenwood is knocking on the door for a starting role, but Marcus Rashford is likely to partner Ronaldo up front. 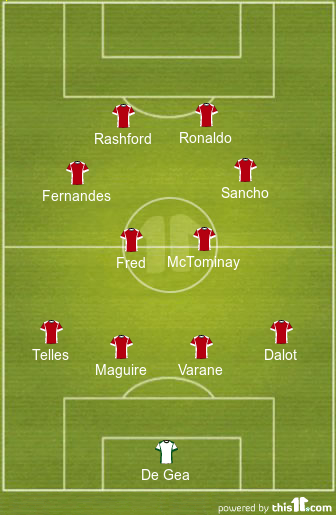