Liverpool take on Arsenal at the Emirates Stadium on Wednesday night. Here is the team we expect Jurgen Klopp to select:

Goalkeeper: Number one goalkeeper Alisson Becker is certain to retain his place between the sticks so Caoimhin Kelleher will remain on the bench.

Defence: Klopp is set to welcome Ibrahima Konate back into the squad after he recovered from a knock that’s kept him out of Liverpool’s last two fixtures.

However, the Frenchman may have to settle for a place on the bench as Joel Matip is expected to keep his place following an excellent run of form lately. Obviously Virgil van Dijk will start once again so Konate may miss out.

Trent Alexander-Arnold will keep his place and he’ll be a huge threat to Arsenal down the right flank. Andrew Robertson is set to start once again with Kostas Tsimikas expected to miss out due to illness.

Midfield: Liverpool could make one change in midfield with Thiago Alcantara pushing for a recall. The Spaniard was rested for the win at Brighton on Saturday but should come back into Klopp’s starting eleven against Arsenal.

Fabinho will continue in the holding role as he’s been virtually ever present in recent weeks while Jordan Henderson is likely to be given the nod for this tough away game.

Therefore, Naby Keita is the man expected to make way for Thiago. Curtis Jones, Harvey Elliott and Alex Oxlade-Chamberlain will be other options for Klopp but James Milner is set to miss out due to illness.

Attack: Liverpool have been handed a major boost as Mohamed Salah is expected to be passed fit. The Egyptian international emerged as a doubt for the trip to Arsenal after picking up an ankle injury at the weekend. But the issue isn’t serious and Salah trained on Tuesday afternoon so is set to feature at the Emirates.

The Premier League’s leading scorer should keep his place in attack along with Sadio Mane so there is one place up for grabs. Luis Diaz continued his excellent start to life at Liverpool with another goal at Brighton but Klopp may be tempted to recall Diogo Jota.

The Portuguese international has a terrific record against Arsenal and will be fresh having started just two of Liverpool’s last eight matches in all competitions.

Diaz will be a huge threat from the bench if he does make way while Roberto Firmino and Takumi Minamino are also other attacking options for Klopp. 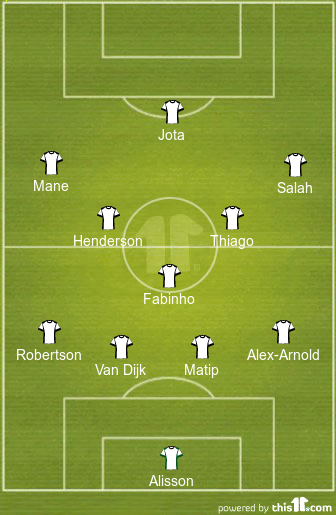