Manchester United take on Middlesbrough at Old Trafford in the 4th round of the FA Cup on Friday evening. Here is how Ralf Rangnick could line up for the game:

Goalkeeper: Dean Henderson was blocked from leaving on loan during the January window so you’d assume Rangnick has plans to give him some game-time. That should mean a run out in the FA Cup with David De Gea dropping out.

Defence: Man Utd have been handed a major boost as Luke Shaw is set to return after recovering from a thigh injury. Alex Telles has arrived back late from international duty so Shaw will start at left-back tomorrow.

Aaron Wan-Bissaka is also back in contention after recovering from illness so he could replace Diogo Dalot at right-back. Victor Lindelof is ill so Harry Maguire will keep his place alongside Raphael Varane in the back four.

Midfield: Manchester United are set to welcome Paul Pogba back into the squad after a long lay-off with a thigh injury. Rangnick has confirmed Pogba could start against Middlesbrough, which will be a major boost for the Red Devils.

Fred is likely to be the man to miss out after his exploits with Brazil in midweek so Scott McTominay should keep his place in midfield. Nemanja Matic is another option but he may have to settle for a place on the bench.

Attack: Jadon Sancho is available again after missing United’s win over West Ham last time out due to personal reasons. With Mason Greenwood unavailable for the foreseeable future, Sancho could get an extended run in the team.

Bruno Fernandes should keep his place while Cristiano Ronaldo will lead the line up front. Edinson Cavani won’t be involved as he’s still travelling back from South America so Marcus Rashford could get a recall.

The England international scored a vital last minute winner against the Hammers before the break so Rashford could come in to replace youngster Anthony Elanga tomorrow.

Jesse Lingard isn’t available after being given some time off following his failed move in January but Juan Mata will be an option from the bench. 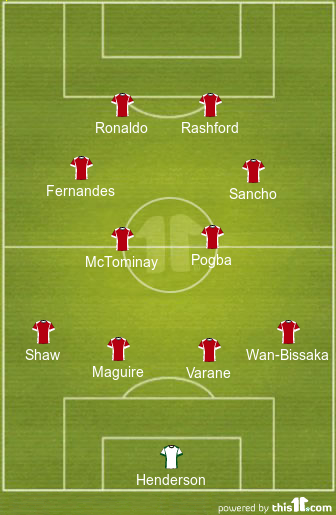