The Blues returned to winning ways on Sunday with a 1-0 victory over West Ham, but their performance was far from convincing.

The Hammers comfortably saw out the attacking threat for most parts of the derby. Jorginho squandered a penalty, but Christian Pulisic eventually bagged a 90th-minute winner.

Manager Thomas Tuchel will be hoping for a better showing against Manchester United. He could be boosted by the availability of Antonio Rudiger, Reece James and Andreas Christensen.

The west London giants are eyeing their first league win at Old Trafford since 2013.

Here is how Chelsea could line up against Man Utd:

Goalkeeper: Edouard Mendy had a comfortable game against West Ham last weekend, keeping his 13th clean sheet of the Premier League campaign. He has been ever-present between the sticks when available for selection, and should start ahead of Kepa Arrizabalaga once more.

Defence: Rudiger and James have already had a training session under their belt unlike Christensen, who has only reported for training today after stomach cramps. Among the trio, Christensen appears most likely to feature on the bench. With Rudiger’s return, Trevoh Chalobah should vacate his spot in the Chelsea back three.

The German is likely to partner Cesar Azpilicueta and Thiago Silva. Tuchel is undecided over James’ best position, but we fancy him to start in his preferred right wing-back position against Man Utd. Marcos Alonso appears an undisputed starter at left wing-back with Ben Chilwell still injured.

Midfield: Jorginho and N’Golo Kante are the best options at Tuchel’s disposal with Mateo Kovacic recovering from an ankle ligament injury. Both players have not been in the best of form for Chelsea in recent months, but Tuchel should trust their experience ahead of Ruben Loftus-Cheek and Saul Niguez for the trip to Man Utd.

Attack: Mason Mount had a quiet game against West Ham, but played a key pass in the lead-up to Alonso’s assist for Pulisic. He should be fancied to continue on the back of eight goal contributions since March. He could have a new partner in the form of Pulisic.

The £40.5 million-rated US star could be rewarded with a starting role ahead of Timo Werner on the back of his late heroics against David Moyes’ side. Kai Havertz should lead the line once again despite Romelu Lukaku winning a late penalty at the weekend. 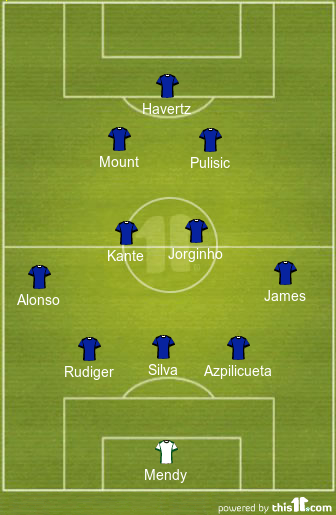