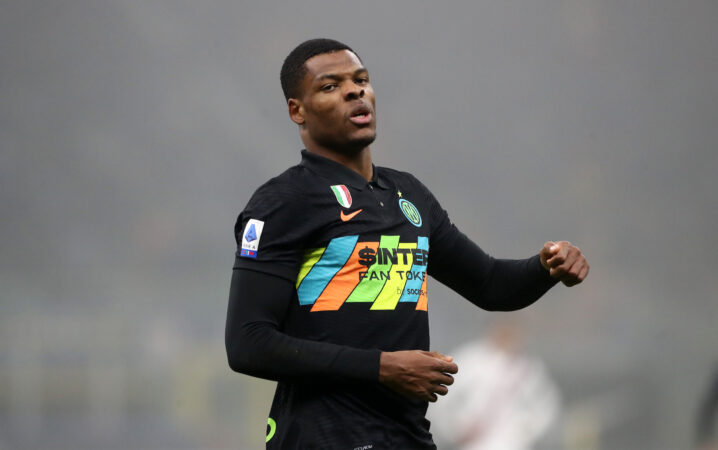 The Red Devils are planning a big summer rebuild, and a new right-back could be one of the priorities with the inconsistent displays of Aaron Wan-Bissaka and Diogo Dalot this term.

Both players have got a fair run in the starting line-up, but have not made the most of their chances. They have yet to contribute a goal or an assist this season with just two games left.

This could pave the way for the purchase of another right-back, and Tuttosport claims that Dumfries is at the top of Ten Hag’s preferences for this summer’s transfer window.

Ten Hag was initially keen on a reunion with Ajax’s Noussair Mazraoui, but that appears unlikely to happen. Bayern Munich are widely expected to sign him on a free transfer.

This has turned the Dutchman’s attention towards Dumfries, who could be prised away for €35 million (£29.5m) this summer amid the Nerazzurri’s financial troubles.

Dumfries made the move to the Nerazzurri from PSV last summer after a superb Euro 2020 campaign for the Netherlands where he bagged two goals and an assist.

The 26-year-old has continued to excel for the Serie A champions this term. He has amassed five goals and seven assists from 41 appearances across all competitions.

Despite his impressive statistics, he has not always been a regular from the starting line-up. With competition from Matteo Darmian, he has made just 19 league starts.

While Inter are willing to sell him for the right price this summer, Dumfries may also be open to the prospect of joining a new club where he has an assured starting spot.

United are in dire need of someone with creativity from the right side of defence. Dumfries has played at right wing-back for Inter, but was previously a traditional full-back for PSV.

He has impressed with his tackling, aerial prowess and regular forward runs. These attributes will have caught the eye of Ten Hag, who prefers an attacking brand of football.

If Dumfries were to make the move to Old Trafford, Wan-Bissaka looks likely to head for the exit door, having barely played this year. He has been linked with former club Crystal Palace.