Chelsea will be looking to get back to winning ways when they take on Wolves at Stamford Bridge on Saturday afternoon. Here is the team Thomas Tuchel is expected to select:

Goalkeeper: Edouard Mendy is Chelsea’s established No.1 goalkeeper so he’s expected to keep his place ahead of Kepa Arrizabalaga between the sticks tomorrow.

Defence: Andreas Christensen is pushing for a recall after missing out recently due to illness but the Dane may have to settle for a place on the bench against Wolves.

Thiago Silva is likely to keep his place in the middle of Chelsea’s back three while Antonio Rudiger should also line-up alongside the Brazilian. Cesar Azpilicueta is tipped to keep his spot so Trevoh Chalobah could miss out on a starting place.

Midfield: There will be at least one change in the Chelsea midfield as Jorginho has been ruled out after being forced off with a knock during the defeat to Everton last weekend.

N’Golo Kante is still on the sidelines so Mateo Kovacic is set to be recalled alongside Ruben Loftus-Cheek in the middle of the park tomorrow afternoon.

Reece James is expected to retain his place in the right wing-back role for the Blues while Marcos Alonso should also start once again on the left in the absence of Ben Chilwell.

Attack: Chelsea were poor going forward against Everton so Tuchel is likely to freshen things up with Christian Pulisic pushing for a recall in attack. The USA international has found himself on the bench lately so he should be keep to impress if he’s given the nod.

Mason Mount could keep his place so Timo Werner may be the man to make way. Romelu Lukaku will hope to force his way into Tuchel’s side after losing his place in recent months but Kai Havertz is expected to lead the line up front.

Lukaku will therefore have to make-do with a place among the substitutes along with Hakim Ziyech and Callum Hudson-Odoi. 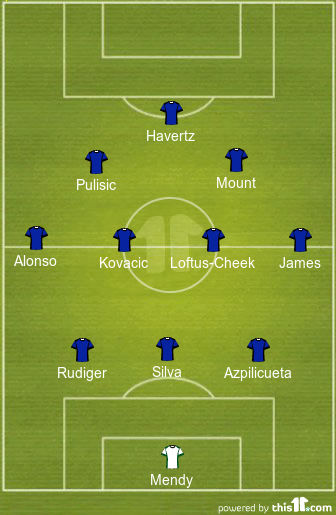