Liverpool will be looking to close the gap at the top of the table with a win over Leeds United at Anfield on Wednesday night. Here is the team we expect Jurgen Klopp to select:

Goalkeeper: Number one goalkeeper Alisson Becker is almost certain to continue between the stick, unless he picks up a late injury. Therefore, Caoimhin Kelleher will remain on the bench.

Defence: Klopp is expected to make several changes in defence after resting some key men for Saturday’s 3-1 win over Norwich City. Trent Alexander-Arnold is set to return at right-back so Joe Gomez will drop out after a rare start at the weekend.

Kostas Tsimikas is also expected to make way after playing against the Canaries so Andrew Robertson will return at left-back. Virgil van Dijk will marshal Liverpool’s backline once again but Ibrahima Konate could come in for Joel Matip.

Midfield: Liverpool are also likely to freshen things up in midfield. Fabinho is set to return after being rested at the weekend and Thiago Alcantara could also be recalled after a substitute appearance against Norwich.

Naby Keita and Alex Oxlade-Chamberlain are likely to drop out and we could see skipper Jordan Henderson also make way after he completed 90 minutes on Saturday.

Harvey Elliott is pushing for a recall and may get the nod ahead of Curtis Jones, James Milner, Oxlade-Chamberlain and Keita.

Attack: Liverpool have been dealt a double blow after Klopp confirmed at his pre-match press conference that Diogo Jota and Roberto Firmino have both been ruled out of the game.

Jota is still nursing an ankle injury while Firmino has a muscle problem that kept him out of the win over Norwich. Both attackers are now facing a race against time to be fit for the Carabao Cup final against Chelsea next weekend.

It means Liverpool may go with the same front three that tore Norwich apart on Saturday. Mohamed Salah, Sadio Mane and Luis Diaz all scored against the Canaries and could line-up together tomorrow.

Divock Origi and Takumi Minamino are options if Klopp wants to rest one of his key forwards for the League Cup final. 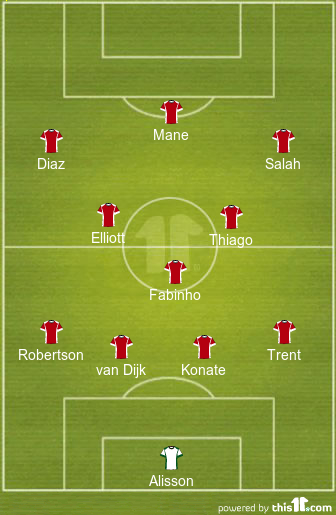