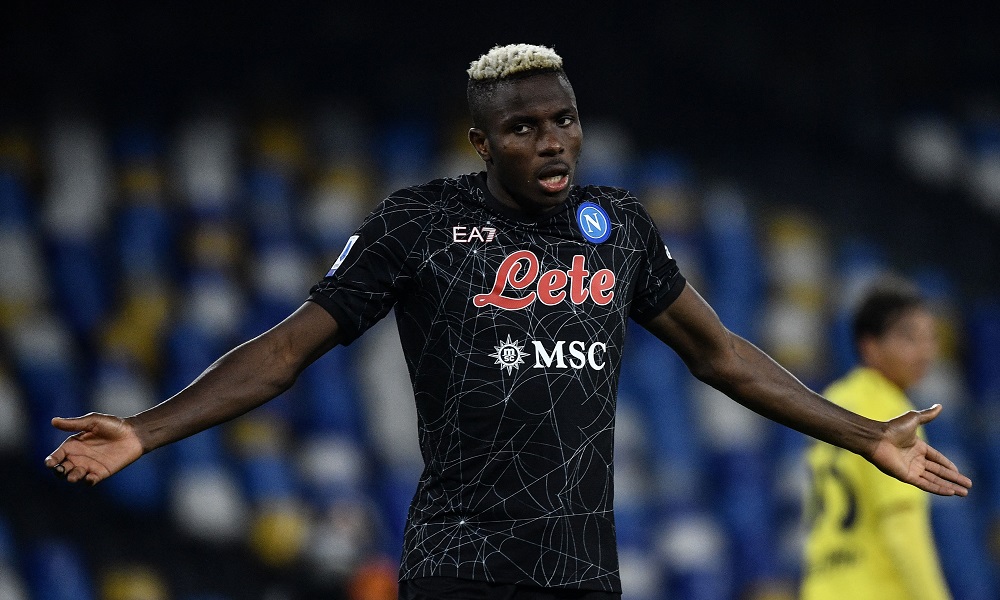 The Gunners were on the hunt for a quality centre-forward in January. They were interested in Fiorentina’s Dusan Vlahovic before he chose to join Juventus.

The hierarchy decided against pursuing other targets, but could be busy this summer with the prospect of Alexandre Lacazette and Eddie Nketiah leaving when their contracts expire in June.

It is now reported by Gazzetta dello Sport that Arsenal are the ‘number one contender’ to sign Osimhen, and have been keeping tabs on him for a while.

The North London club are eyeing a new striker with physicality and athleticism across the lines, and Osimhen has been identified as the ideal signing for them going forward.

However, their pursuit could be largely dependent on Champions League qualification with a huge outlay of £84 million reported needed to prise away Osimhen.

Arsenal have lacked a genuine goalscoring striker this term. Lacazette and Nketiah have netted just six league goals between them. Pierre-Emerick Aubameyang managed just four before his winter exit.

This has proved costly over the course of the campaign, and the Gunners recently went on a three-match losing league streak where they were yearning for a better option up front.

Osimhen has had a season disrupted by a cheekbone fracture, but has still been impressive for Napoli with 16 goals and five assists from 28 appearances across all competitions.

His aerial ability and finishing are among his main strengths, but he is also strongly built and does not shy away from taking shots. He has averaged over three shots per game.

He appears in the similar mould of Vlahovic in those aspects. At 23, he is entering the prime of his career and could be an excellent acquisition, particularly in the long-term.

Arsenal are currently on course for Champions League qualification with a two-point lead over fifth-placed Tottenham, but there is still plenty of work to do with five matches left.

Qualifying for Europe’s elite competition could be essential to landing Osimhen. The Gunners can recoup most of the funds from their participation in the Champions League.