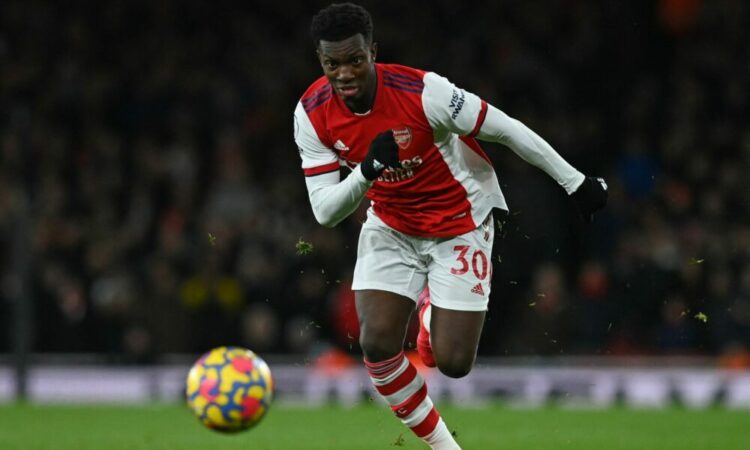 Arsenal striker Eddie Nketiah produced a superb performance up front as the club registered an impressive 4-2 Premier League win over Chelsea on the road.

The Gunners went into the game last night on the back of three straight league defeats. They were clear underdogs against the Blues, but managed to stun everyone.

Nketiah was pivotal to the result with a brace. The Arsenal graduate made only his second league start in a year, but grabbed the opportunity with both hands.

He opened the scoring in the 13th minute after a loose back pass from Andreas Christensen to Edouard Mendy. Nketiah showed terrific composure to find the net.

The Gunners went into the interval with a 2-2 scoreline, but Nketiah put them ahead once again in the 57th minute after another bit of good fortune in his favour.

The 22-year-old took advantage of a defensive mishap between Thiago Silva and Malang Sarr by poking home a shot that found the bottom left corner of the Blues’ net.

The Gunners eventually sealed a 4-2 triumph at Stamford Bridge, their second successive win at the stadium.

Aside from his goals, Nketiah was also heavily involved over the course of 70 minutes. He won eight ground and aerial duels while managing three successful tackles.

It was a perfect all-round performance from the centre-forward. This has been a key facet that has seen Alexandre Lacazette get the regular nod to lead the line.

Following the game, manager Mikel Arteta acknowledged that Nketiah has proved him wrong and accepted he should have had more courage to play him more this term.

Nketiah should be assured his place up front against Manchester United in Saturday’s early kick-off. It remains to be seen whether he can replicate his showing from Wednesday.

The striker’s contract is due to expire at the end of the campaign. He has the chance to potentially establish himself as the Gunners frontman next term with more stand-out displays.

Otherwise, he does not have much to lose either. Another couple of solid performances could put himself in the window to receive a lucrative contract package from a top European side.

Arsenal are currently only goal difference behind fourth-placed Tottenham Hotspur in the Premier League standings. The top-four race could do down to the wire with six matches left.