Chelsea take on Burnley at Turf Moor on Saturday afternoon. Here is the team Thomas Tuchel is expected to select:

Goalkeeper: Edouard Mendy is set for a recall after being rested for Chelsea’s FA Cup comeback win over Luton Town. Kepa Arrizabalaga will therefore drop to the bench.

Defence: Tuchel will need to assess the fitness of Trevoh Chalobah after he was forced to miss the game in midweek due to a groin injury that he picked up against Liverpool last weekend. If he’s ruled out, then Cesar Azpilicueta is expected to start on the right side of the back three on Saturday with Andreas Christensen a doubt due to an Achilles problem.

Thiago Silva should be recalled after being rested against Luton while Antonio Rudiger is likely to keep his place so Malang Sarr will have to make-do with a place among the Chelsea substitutes.

Midfield: There will be changes in midfield as well with N’Golo Kante expected to be recalled after he was an unused substitute against Luton last time out. Mateo Kovacic is also in-line for a recall with Saul Niguez and Jorginho dropping out.

Ben Chilwell remains on the sidelines due to a knee injury so Marcos Alonso should return on the left flank with Kenedy making way. Reece James should also be recalled in place on Callum Hudson-Odoi on the right.

Attack: Chelsea should make some changes in attack following the FA Cup win at Kenilworth Road. Kai Havertz was rested for that game but the £71m star should be recalled to start up front against Burnley.

Romelu Lukaku grabbed the winner on Wednesday night but the Belgian international could still find himself dropping to the bench this weekend.

Christian Pulisic is expected to be recalled after being on the bench against Luton so Timo Werner could make way despite finding the net against the Championship outfit.

Hakim Ziyech remains a doubt due to a calf injury that kept him out of the FA Cup game so Mason Mount could keep his place in Chelsea’s attack. 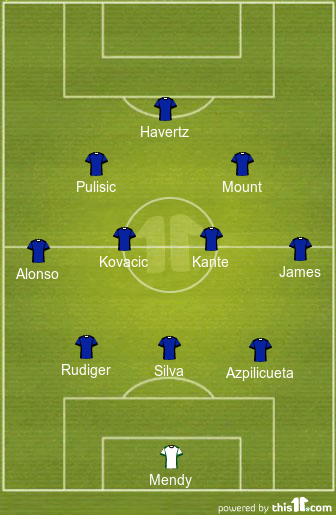