Liverpool take on Manchester United at Anfield on Tuesday night. Here is the team we expect Jurgen Klopp to select:

Goalkeeper: Alisson Becker made several vital saves to help secure Liverpool’s 3-2 win over Man City in the FA Cup semi-finals on Saturday. The Brazilian will once again start between the sticks tomorrow.

Defence: Ibrahima Konate put in another impressive performance at the weekend and he continued his goal-scoring form with the opening goal at Wembley. However, Klopp is expected to recall Joel Matip against Man Utd with the 30-year-old coming in alongside Virgil van Dijk in the middle of Liverpool’s defence.

Trent Alexander-Arnold will keep his place at right-back while Andrew Robertson should also start once again for the Reds so Joe Gomez and Kostas Tsimikas will have to settle for places among the substitutes.

Midfield: Liverpool dominated in midfield for much of the game against City with Naby Keita putting-in a terrific display. However, he could still find himself dropping out against Man Utd with Klopp opting to freshen things up.

Jordan Henderson is likely to be recalled to captain the side at Anfield. Fabinho should anchor the midfield once again while Thiago Alcantara is expected to keep his place having been hugely impressive lately.

It means the likes of James Milner, Curtis Jones, Harvey Elliott and Alex Oxlade-Chamberlain will battle for places on the bench alongside Keita tomorrow night.

Attack: Liverpool were devastating going forward during the first half at Wembley with Sadio Mane in particular tearing City apart with two goals. The Senegal international is expected to keep his place against Manchester United.

Mohamed Salah failed to break his goal drought but the Egyptian should still retain his place tomorrow while Diogo Jota is pushing for a recall. The £41m star was left out of the eleven at Wembley but should return tomorrow evening.

Luis Diaz may drop to the bench where he’ll be joined by Roberto Firmino. 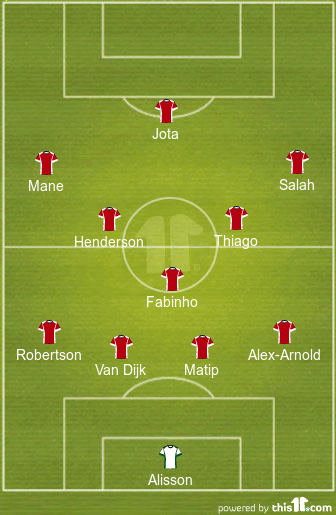