Manchester United will be aiming to return to winning ways when they face Everton on the road in Saturday’s early Premier League kick-off.

The Red Devils returned from the international break in disappointing fashion last weekend as they played out a 1-1 draw against Leicester City at Old Trafford.

Man Utd are still within three points off the final Champions League spot, and have the opportunity to cover up ground with a victory over the Toffees on Saturday.

However, it may not be straightforward as United have won just one of the previous six meetings against Everton. The Toffees have also won once with the rest being draws.

Here is how Man Utd could line up against Everton this weekend:

Goalkeeper: David de Gea has been an undisputed choice for Manchester United in the Premier League this term. The Spaniard has come up with several stand-out saves, single-handedly winning points on occasions. There is still a debate over his reluctance to make high claims in the box, but should be an assured starter at Goodison Park.

Defence: Raphael Varane and Harry Maguire put in a good showing against the Foxes, but it was rather Alex Telles at fault for the goal conceded. The central defensive duo are expected to continue against Everton.

At right-back, Diogo Dalot seems to have established himself as the regular ahead of Aaron Wan-Bissaka, and should keep his place. Luke Shaw was substituted at half-time against Leicester. Following the game, manager Rangnick said that the England star is still suffering from the after-effects of his broken leg in 2015. His absence could see Telles feature at left-back for Man Utd.

Midfield: Scott McTominay had a poor display against Leicester, and was very lucky to escape a red card for his reckless challenge on James Maddison. He was eventually substituted in the 55th minute. It won’t be a surprise if he drops to the bench this weekend. Instead of fielding Nemanja Matic, Rangnick could instruct Paul Pogba to play in a central role alongside Fred, who scored a vital equaliser at Old Trafford last weekend. The Brazil international has been one of few players, who have shone under Rangnick’s tutelage.

Attack: In attack, there could be a solitary change with Cristiano Ronaldo leading the line. The £31.5m star was a surprise absentee for Man Utd last weekend with an illness, but looks set to face the Toffees, having returned to training this week. Behind him, it should be the usual suspects. Bruno Fernandes should revert to his preferred number 10 role after playing as a false nine last weekend. He was far from effective, missing a clear-cut scoring chance.

Jadon Sancho, who has been one of United’s best-performing players since the winter break, should feature on the left wing with club graduate Anthony Elanga on the opposite flank. Marcus Rashford could be an option to replace Elanga, but we don’t see that happening. Rashford was ignored to start up front last weekend with Ronaldo sidelined. The England star may have to settle for another cameo off the bench on Saturday. 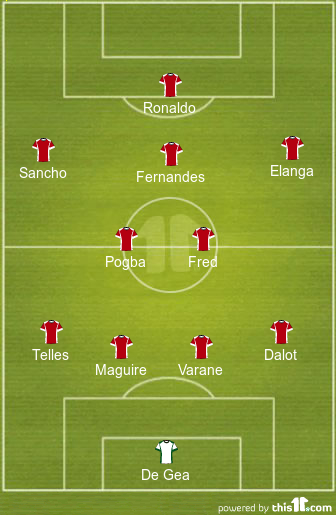