The Reds suffered a 1-0 home defeat to Inter Milan in the Champions League on Tuesday, but still progressed to the quarter-final with a 2-1 aggregate win.

It was their first loss since the turn of the year, but the Merseyside giants were unlucky with Mohamed Salah hitting the woodwork twice.

Manager Jurgen Klopp will be eyeing a strong response from his players against Brighton with the Premier League title race wide open at the moment.

Here is how Liverpool could line up against Brighton:

Goalkeeper: Alisson Becker has been an undisputed starter for the Premier League and Champions League games for Liverpool unless rested. He has kept 14 clean sheets this campaign, just one behind Manchester City’s Ederson in the race for the Golden Glove. The Brazilian is expected to start in goal.

Defence: Klopp has recently swapped between Joel Matip and Ibrahima Konate for the second central defensive spot alongside Virgil van Dijk. It may not happen this weekend with Konate doubtful with a knock which saw him miss the Inter game. Trent Alexander-Arnold and Andy Robertson should be assured starters for Liverpool in the full-back positions.

Midfield: Curtis Jones was a surprise pick for the Inter Milan game. Klopp probably wanted to utilise the midfielder’s attacking attributes. We fancy the Liverpool graduate to drop to the bench this weekend with club captain Jordan Henderson reclaiming his starting spot.

The England star should be accompanied by Fabinho, who has been an ever-present figure in the holding midfield role. Thiago Alcantara started in midweek after a brief absence with a muscle injury. Given his injury record, it won’t be a surprise if Naby Keita gets the nod against Brighton. The £27m-rated star made a vital goal saving tackle against West Ham last weekend.

Attack: Mohamed Salah has been unlike himself in the last two games. The Egypt international has hit the woodwork while also squandering good scoring chances. Despite this, his position is never in doubt. He is expected to start for Liverpool on the right wing.

Diogo Jota may drop to the bench to facilitate the return of Luis Diaz. With Diaz predominantly being a left winger, Klopp may once again deploy Sadio Mane as the main striker. 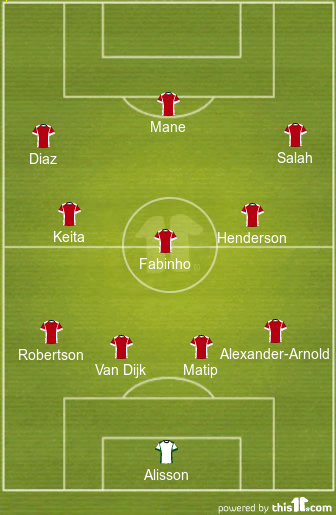