The Gunners are currently on a three-match winning streak, and have the chance to jump to fourth in the league standings this weekend if the other results go their way.

They are already in a strong position in the Champions League race. The club are presently two points adrift of fourth-placed Manchester United, but have three games in hand.

Here is how Arsenal could line up against Watford:

Goalkeeper: Aaron Ramsdale has failed to keep clean sheets in back-to-back league games. A poor backpass from Gabriel Magalhaes contributed to Wolves’ early goal last weekend, but the Gunners made amends with a dramatic comeback win. The England star has kept 11 clean sheets in the league this term, and should fancy another shut-out against an out-of-form Watford attack.

Defence: Takehiro Tomiyasu was on the verge of making his comeback from a calf issue before suffering another setback. He has picked up an injury in his ‘other calf‘ and looks set to miss more games. With the 23-year-old ruled out, it should be a straightforward decision for manager Mikel Arteta for the right-back role.

Cedric Soares has impressed from the position in Tomiyasu’s absence. He should keep his place alongside the regular personnel. Ben White and Gabriel have started in central defence in every league game since September. That should not change. Kieran Tierney is set to continue at left-back ahead of Nuno Tavares.

Midfield: There was a different approach against Wolves last weekend. Granit Xhaka played in an advanced midfield role alongside Martin Odegaard while Thomas Partey was the only anchorman. It seemed to bring the best out of Xhaka, who looked confident with his distribution. Arteta may be tempted to go with a similar system at Vicarage Road.

Attack: Bukayo Saka and Alexandre Lacazette are nailed-on starters for the Gunners. The latter has been frustrating in front of goal with clear-cut chances missed, but made his mark against Wolves with the dramatic last-minute winner, though it was deemed a Jose Sa own goal.

With Emile Smith Rowe having just recovered from a bout of coronavirus, Gabriel Martinelli may get the nod alongside the duo. He has started all league games but one since December. Nicolas Pepe had a tremendous cameo against Wolves with a goal and a key pass for Lacazette’s last-minute strike. However, Arteta could still go with Martinelli. The youngster’s pace could be key on the counter-attack. 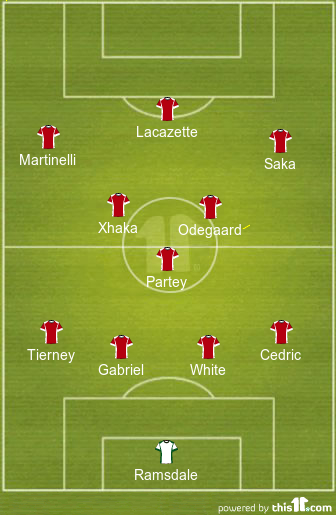